A national award honouring tennis volunteers has been won by the President of the Onslow Park Tennis Club, James Edwards, who this week beat two other finalists to take top honours of the prestigious Newcombe Medal at the Australian Tennis Awards at Crown Palladium in Melbourne.

The award honours a volunteer who foster relationships within and between their tennis club and the community.

James was presented with his trophy by former world number one, Evonne Goolagong-Cawley and 2017 Newcombe Medal winner Ashleigh Barty, in front of more than 500 members of the tennis fraternity.

James has held the position of the President of the Shenton Park club for the past 13 years.

His vision has reinvigorated the club from a grass court club that was breaking even and had fewer than 100 members, into a four hard court, seven grass court club with thriving juniors, pennants, adults and social memberships.

The club now has 240 members and is looking to convert two under-used grass courts into flood-lit hard courts to enable Onslow Park to grow further.

The club nominated James not only because of the club’s transformation, but also because of the countless hours he invests in club activities as well as having a busy professional life.

James said he was delighted to be recognised and credited the work of his committee.

This award is a reflection not only of my efforts, but also the commitment and support of the committee members and many dedicated volunteers,” he said.

James was one of two finalists flying the flag for WA at the Newcombe Medal, with Riverton Primary School being the winner in the Most Outstanding Schools category.

Tennis West CEO Michael Roberts said he was proud of the achievements of the WA finalists.

“Volunteers really are the backbone of our sport, and tennis is extremely fortunate to have volunteers of the ilk of James Edwards within our community,” he said.

“It is fantastic to see James’s hard work, passion and dedication recognised at a national level. He is truly deserving of the honour bestowed on him.”

The Newcombe Medal Australian Tennis Awards recognise players, coaches, clubs, communities, volunteers and officials for their service to the sport.

Nominees for the award are selected by a panel of esteemed Australian champions and highly respected people in the tennis community. 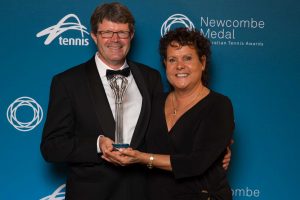