Matt excited about the future of tennis at EFLTC 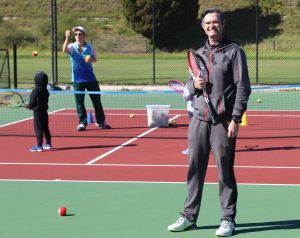 New Head Coach at East Fremantle Lawn Tennis Club Matt Bull is excited about the future of tennis at the club. Matt, one of only three Tennis Australia Master Club Professional coaches in WA has just taken the reins from long-standing club professional Scott Marshall.Matt said “It was pretty daunting at the start considering the reputation the Marshall family has in WA tennis over the years and especially considering Scott’s Father before him, Arthur Marshall, was the first coach at the club in 1968. Thankfully since arriving I have had nothing but support from the club and its members”.

“It was perfect timing when I arrived at the club as they were just re-surfacing their courts. One of the old hard-courts was earmarked to be turned into overflow parking, however I looked at it as the perfect place for us to put in 2 Hot Shot Red courts. The club were brilliant and said, ‘let’s do it’! Now we are only one of two clubs in Perth who have designated tennis courts for kids aged 5-8 years to play and learn the game”.