Some tennis stars of the future have been battling it out on the courts at Onslow Park Tennis Club in the inaugural ANZ Hot Shots Orange Matchplay competition.

Twenty-four girls and boys competed in teams of three players over six weeks.

Each team chose a team name and colour and played a combination of singles and doubles matches in a round robin competition against three other teams.

Last Saturday, the final round of the competition included the grand final between the Babolat Rebels and the Tennis Crushers.

In a hard-fought contest, Rebels Zack Barley, Rob Forman and Owen Lisle narrowly won 3 rubbers to 2, to claim the title.

The next six-week competition will start in February next year. 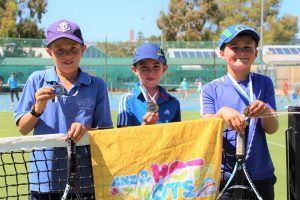